What an incredible morning we went through that day… could not be any better! And it all started after Nika Budagashvili reported via Facebook post about several Pale Rockfinches he found a day earlier near Tbilisi – Teleti Hills west of Kumisi Lake to be more precise. Later, Nika shared the exact coordinates with us, and the next day at 6:30, Asmus Schröter and I were already there. Rain was forecast for midday, but this morning the weather was just fine.

There is also a St. George named Monastery here – an inconspicuous, unremarkable little complex, currently under refurbishment, and there are Mediterranean cypress trees planted around the monastery for decoration – a classic shelter for European Greenfinches. Their call may often easily resemble Pale Rockfinch, and even more so confusing when the two meet at one and the same site. In general, quite an interesting place, the environment of which consists of mainly dry stony hills with sparse scrubby vegetation. A few hundred meters above it there is a large patch of pine woods planted during soviet times, where a population of Krüper’s Nuthatch thrive. 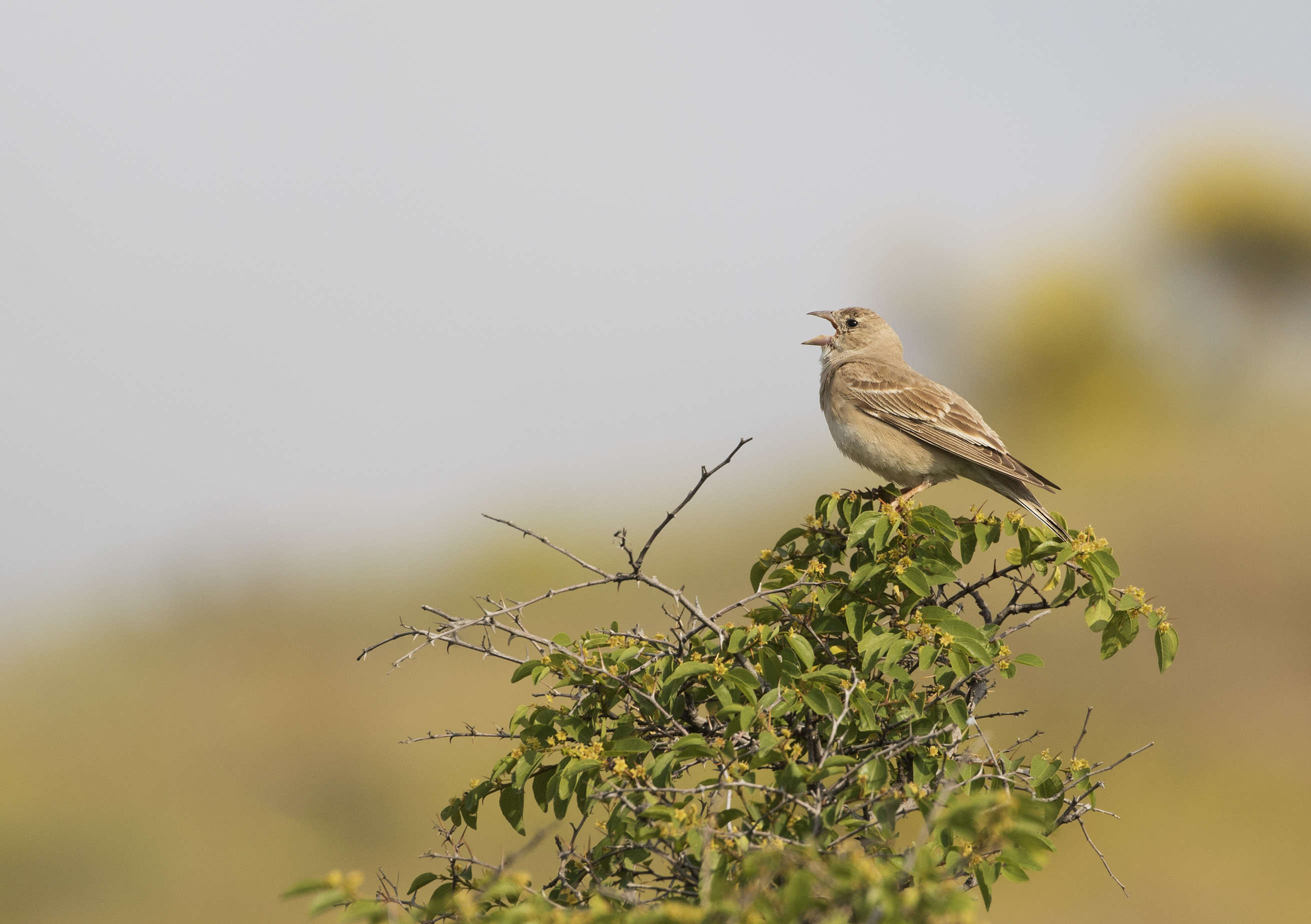 We headed higher up the slope, and just after a few steps, we immediately heard one, and soon found the performer of this song itself, sitting on a small pale rock next to a low bush. Wow, so easy? We were absolutely delighted, and yet unaware that this was just the beginning. Soon after that we were witnessing a great show; we frequently saw pairs squabbling, with several individuals chasing each other, when two males whizzed through right near my head almost crashing into my face. It was a typical territorial behavior but such a high density in such a small territory is really amazing – we saw and heard at least ten singing males, and in total we surely saw up to thirty individuals, which we nevertheless would call a conservative estimation.

As it turned out later, we were observing only one fragment of a more significant influx. Our friends and colleagues have observed, earlier or in parallel, the similar scenes in various locations in eastern and southeastern Georgia; Chachuna Reserve, Vashlovani National Park, David Gareji Monastery, etc. It is rather an extraordinary phenomenon that occurs once in a few years’ time. In normal years, this bird is quite rarely seen in Georgia and it is definitely not one of the expected species during standard ornithological tours to this country. But, somewhere deep in my heart I always believed that somewhere far in eastern Georgia… close to Azerbaijani border, there is at least one secluded place where several pairs may breed. And now we have the pleasant task to follow the events and hopefully document the first Georgian breeding record near Tbilisi?!

By the way, we had a short conversation with Vasil Ananian, who confirmed that an unusually large numbers of Pale Rockfinches were observed in Armenia at the end of May. Unfortunately, there is no news from Azerbaijan yet, but we can assume that the situation there is pretty same, mainly in the province of Nakhichevan, where they normally breed, and perhaps in the northeastern part, near the Georgian border. This is just opposite to previously mentioned Vashlovani National Park.

And what is happening outside the South Caucasus? In a personal conversation, Yoav Perlman informed us that the same phenomenon is taking place in Israel currently, where exceptionally high numbers are observed on Mt Hermon too, where they regularly breed, albeit in much smaller numbers. The last who reported about an influx was our colleague from Turkey, Emin Yoğurtcuoğlu, who via Facebook informed about recent observations from Agri, Kars and Erzurum, and further expansion towards the north. Therefore, dear European friends, do not be surprised to spot this bird somewhere in your own patches – so, keep your eyes peeled and ears tuned, as there is a realistic chance this year.

What else? With big smiles on our faces and happy as sandboys, Asmus and I spontaneously continued our journey deeper to the south, hoping to see anything, no matter what. Oddly enough, the road led us to a landfill, not far from a small provincial town of Bolnisi. What can be interesting here, you may ask – we let you to decide for yourself. Rosy Starlings gave us a proper show, and to be more precise, there were thousands of them! An Imperial Eagle – kept soaring briefly far in the sky, while several Egyptian Vultures were constantly patrolling above our heads and the dam – at noon, at the end of the tour, while we were drinking our freshening coffee, seven of them appeared simultaneously soaring in the sky. From the point of view of other interesting birds, we also saw a few Hoopoes, Western Rock Nuthatches, Isabelline, Pied and quite a few Black-eared Wheatear, including perhaps some hybrid types too, a of course dozens of Woodchat, Lesser Grey and Red-backed Shrikes, alongside with some of the other comparatively common birds.

Thank you and until the next time.