It is a universally acknowledged truth that Georgia has earned a reputation as the ornithological pearl of the Caucasus. This is perfectly natural given the advantageous location, biodiversity-rich habitats and the most iconic birds of the region concentrated in this charming little country. Georgia is notable not only for the spring and autumn seasons, but also boasts a wide variety in winter. Winter is diverse in its own way and has a lot to offer, which is what this tour specializes in. During these eight days we will have the opportunity of seeing some of the most coveted birds of the Caucasus in the best possible way. This is probably everyone’s favorite period of the year when winter has not yet sunk beyond the horizon, but the warming rays of the spring sun are already breaking through the opaque sky – an exciting time in the Greater Caucasus Mountains, revealing a complete set of specialist fauna. The region is brimming with life, and most of the birds are gathered in flocks, including Caucasian Great Rosefinches and Güldenstädt’s Redstarts. At this time they are very common, being practically everywhere within the confines of an alpine town, where we plan to spend several unforgettable days experiencing the delights of this epic region. The continuation of the tour will see us visit eastern Georgia and explore the steppes and semi-deserts of well-known protected areas, where Little Bustard, Black Francolin and Eastern Imperial Eagle are among many attractions expected in this region. Frequently sighted are large groups of various lark species sometimes in their thousands, with additionally good chances of finding a few Western Palearctic rarities, such as White-winged Lark and Oriental Skylark. Target woodpeckers are extremely easy and encountered in still leafless forest parks, while on steppe lakes near Tbilisi our primary interest is the giant Pallas’s Gull, Pygmy Cormorant and Dalmatian Pelican, along with many other wintering waterfowl. We are in for lots of surprises during this tour. In addition to superb birding, we also guarantee comfortable lodging and perfect meals in decent quantities, as is customary in Georgia.

Meeting in the capital of Tbilisi, we will head north to an alpine town surrounded by divine panoramic landscapes of the Greater Caucasus Mountains, and over which the eminent Kazbegi glacier rises. A few hours drive, accompanied by several birding breaks along the way, and we are there. Over the next few days we will enjoy magnificent views of the most wanted highland birds of this wonderful hotspot. One of the first birds we will target upon arrival will be the Caucasian Great Rosefinch and Güldenstädt’s Redstart. In winter, they leave breeding sites, which are basically located at an altitude of more than 3000 meters, and plunge down to their traditional wintering grounds in the vicinity of the town, where they form flocks, like many other bird species of this area. March is still too early for mating, and food is still plentiful here. This is Sea Buckthorn, which is the main diet for both birds on cold winter days. These shrubs are found everywhere in the town and along the river valley, which are literally teeming with birdlife. In any sense, this is the best time and the best place for such high-quality views of these exclusive birds. This is more or less the same environment where we tend to see a lot of other birds too, including Caucasian Twite, Caucasian Black Redstart and Caucasian Ring Ouzel.

If some birds like to feast in the bushes – then others prefer to spend all their time on the ground, for example Caucasian Horned Lark. The best place to spot them is always a snow-covered meadow, preferably near a water source. There are also less predictable birds, such as Red-fronted Serin for instance. They always prefer canary grass, which grows almost everywhere along the river, where, by the way, the White-throated Dipper is very common, but they are not averse to eating various goodies in local farmyards, so we will see them much more often than we can imagine, especially given that they are quite noisy. To see the main pride of the Caucasus – the endemic Caucasian Snowcock and Caucasian Grouse, we will explore one of the many beautiful gorges in the neighborhood. These birds are more territorial, and regardless of the season, they always remain on their territories, except for minor movements to different heights, which may depend on several circumstances. An early appearance, of course, will reward us with a morning concert, reminiscent of a vocal competition – snowcocks have a very distinctive and piquant polyphonic sound, which could never be confused with anything else, and this will help us to detect them faster in the exposed rocks. The grouse, although noiseless, at least at this distance, can be seen on snow-covered rhododendron slopes thanks to its dark colour and characteristic elegant silhouette. We are also very likely to see the Alpine Accentor in the same area as one of several other birds of interest to us. Another gripping show is promised to be given to us by hundreds of Alpine Choughs chattering against the background of snowy mountains. From the point of view of raptors, we should certainly expect to see the most obvious and common species for the region, such as Bearded Vulture and Golden Eagle, but any other broad and slender-winged raptors are not excluded, as well as some of the early spring migrants. We will not leave this region without seeing another local attraction – an indigenous East Caucasian Tur. A group of these impressive animals can be spotted on the rocky slopes in several places, but we should easily find them in the same area as the snowcocks and grouses. And with a little bit of luck, we may also catch sight of a way more infrequent Lynx. Even a Grey Wolf is possible. 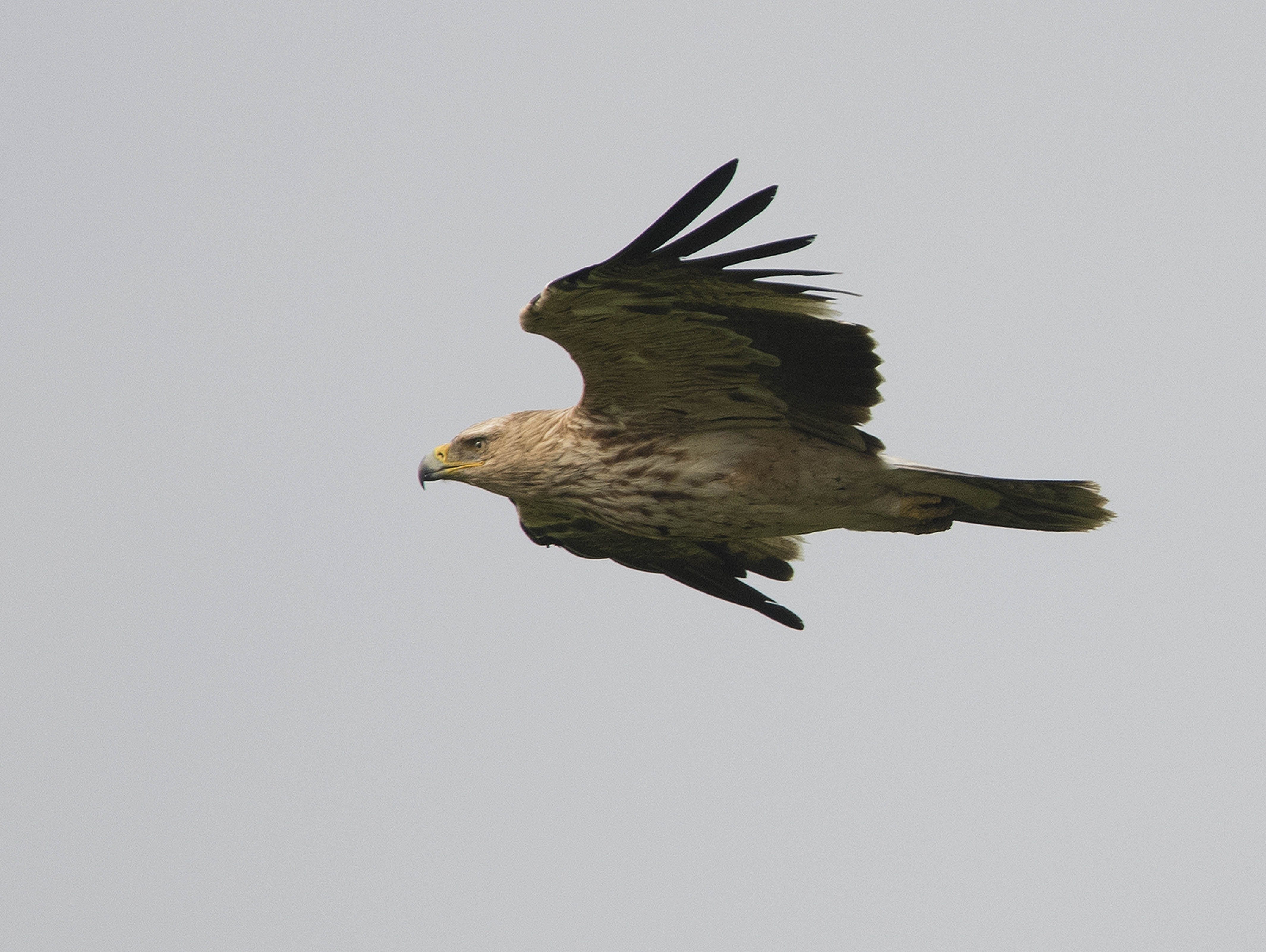 The time has come to change the scenario, and we are heading east. In this part of Georgia there are several key and probably some of the most interesting protected areas in the entire Caucasus region that we plan to visit in the next few days. The path to the national parks leads through vast agricultural lands, mainly wheat fields, smoothly and seamlessly flowing into boundless untouched steppes and semi-desert rolling hills. These territories host large assemblages of thousands of larks, consisting mainly of Calandra Larks and Eurasian Skylarks – what a pleasure to see them exalting over the black and green geometric fields. It is among such groups that we will need to look for rarer species, such as White-winged Lark and Oriental Skylark. The Black Lark is a difficult target, but it has every right to be on the list of expected birds. The Greater Short-toed and Turkestan Short-toed Larks are not as numerous as the aforementioned lark species, but they are quite common. These plains are also home to many hundreds of wintering Little Bustards, and we are likely to encounter several small flocks. Of course, such a spectacular event cannot go unnoticed, so it attracts many different raptors to these places, which also plays into our hands. We will look for Pallid Harrier, Peregrine Falcon and, perhaps, a few more desirable specimens, such as Saker and Lanner Falcons. As for the large eagles, we will definitely get to see all three Lesser Spotted, Greater Spotted and Steppe Eagles, but the most important representative among all is still the Eastern Imperial Eagle, and since we are in his domain, we will be meeting this majestic bird more often than with all the others. Another cool raptor that cannot be overlooked is a Long-legged Buzzard – so big in appearance that it often resembles an eagle, and there are quite a few of them in these parts. 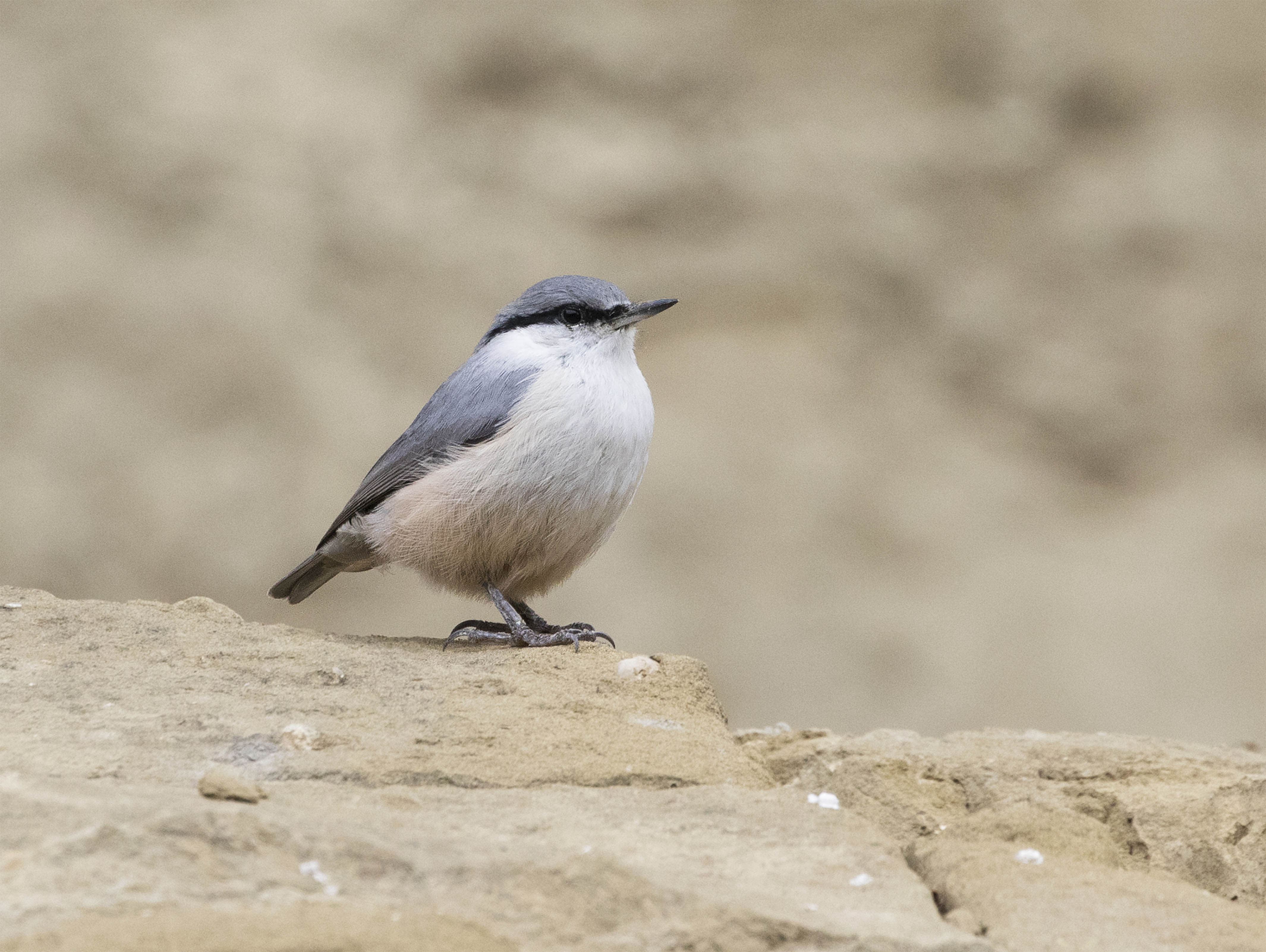 The journey is short, but quite eventful, considering all the new and interesting opportunities along the way. Almost every few hundred meters we will come across a new group or solitary birds, among which an Isabelline Wheatear is not uncommon. There is also a high probability of seeing Eastern Black-eared and Finsch’s Wheatears. Every time when finding a group of Yellowhammers, one of them can easily turn out to be a Pine Bunting. Our actions will be closely watched by Little Owls, almost perfectly merging with the environment along the road. The half-asleep Eurasian Eagle Owl will also try to hide all signs of its presence from us, but we know its habitats well. As we approach the park, both Griffon and Cinereous Vultures should begin to appear, and we will find a White-tailed Eagle near the water reservoir, which we intend to explore more thoroughly. Being rich in various biotopes, there is a decent place preserved also for the population of Black Francolins here. And yet the prettiest places are located in the depths of the park – impressive dry gorges with an abundance of even more luxurious wintering and resident birds. Here, one of the most pleasant observations will probably be a Wallcreeper – yes, you heard that right. In winter, they leave the mountains of the Greater Caucasus and find refuge among these exotic places, where Rock Sparrow and Western Rock Nuthatch are also commonly found. A meeting with a Chukar Partridge is simply inevitable, while a pair of Black Storks should already be perched on a nest. The mammals are most likely in these utterly remote parks and we should expect to see at least a Goitered Gazelle and Golden Jackal.

In the penultimate days of our program, we will take some time to enjoy the great views of Syrian and Middle Spotted Woodpeckers. A couple of forest parks on our route are exceptionally good for these two and almost all other species of European woodpeckers, where we should also be keenly on the lookout for any chance to spot a rather scarcer White-backed. In the pine woodland near Tbilisi we are awaited by a Krüper’s Nuthatch – the capital of Georgia is the easternmost range of the distribution of this showy bird. The final part of the tour is dedicated to the inland lakes which are excellent birdwatching spots, especially at this time of year when lakes are rife with diverse wintering wildfowl. We will undoubtedly find some interesting species among them, including Ruddy Shelduck, but, as is often the case, it may also be possible to pick up a few unexpected surprises. Dalmatian Pelicans are another main highlight of the season on these lakes, and although the chances are slim, there is still a prospect of finding Great White Pelicans mixed with the same flock. In addition, this should be the only time of the year when the number of Pygmy Cormorants can easily exceed the number of their larger relatives. Among all the gulls, a huge majority is expected to be made up of Armenian Gulls, but Pallas’s Gulls clearly stand out from this crowd, which differ from all others in many ways. Another subject of our interest while birding the lakes will be passerine birds, and one of them is a Homeyer’s Grey Shrike. It is also worth taking a closer look at all the available stonechats, since this is the time when Caspian Stonechats begin to emerge. What we can also get as a bonus is a Moustached Warbler, but not only that. In any case, we will add quite a few more interesting birds into our country list before we head back home.